Your favourite Gin Cocktail is a hoax! Yes, that’s right, the Tom Collins cocktail was made famous by the notorious Tom Collins prank of 1874. The idea was that you would tell your friend that a man named Tom Collins was sitting at a local bar, bad-mouthing him, and that he should do something about it. When your unsuspecting friend walks into the bar and asks for Tom Collins, the bartender would inform him that Tom Collins isn’t a real person. It was so popular that the local newspapers reported the prank. Perhaps the first case of a story going viral!

In 1876, Jeremy Thomas, considered by many as the “Father of Cocktails” and a respected mixologist, came up with the idea of a gin-based cocktail and decided to call it a Tom Collins. It soon became a fancy cocktail of choice for high society. Quite genius if you consider that all the marketing had been done for him years before. Even more respectable if you consider that this publicity stunt took place in New York and that without the help of social media.

While the Tom Collins have existed for many years and have gone through numerous name changes, mixing styles and popularity, it has certainly remained to be a simple and basic cocktail, which is precisely why we like it.

KEEPING THINGS SIMPLE AND EASY IS A 1ST PRINCIPLE

One might be forgiven for guessing that the number one most popular cocktail is likely to be some obscure pink-shaded, fruit infused mixture, elegantly poured over an ice-sculpted masterpiece – but one would be deadwrong. Believe it if you will but the most popular cocktail for 2020, for no less than six years going, is still the Old Fashioned cocktail; a mix of sugar, bitters, water, and whiskey (or less commonly brandy), with an orange slice garnish, served in a rocks glass. At 1st Principles Distilleries, this is the kind of simplicity we encourage and believe in. It’s also one of our values which we hold dear. Our approach, and we feverishly encourage this amongst all our craft spirit connoisseurs, is that the perfect cocktail is simple, easy to mix, and a joy to drink. It further comprises superior quality crafted spirits, bitters and is combined with natural botanicals. It really is that simple.

A COCKTAIL IS A COCKTAIL, OR IS IT?

Just to be clear; while we believe in keeping things simple, we also honour the age-old traditions and will admit we are rather proud to be part of the art, craft, and heritage of the art of mixology. A craft with a long and rich history, infused (pun intended) with controversy, stories, tradition and even conflict!

So, what is a cocktail anyway? We turn to mixologist and Master of the Cocktail, David. A. Embury, to help us formulate a basic understanding and definition. According to Embury a cocktail has three components:

Further to the above a cocktail must adhere to the following principles:

SPRITZERS, COOLERS AND CHASERS – AND ALL THE FUN IN BETWEEN

In the early days, as cocktails became more popular, they were classified into major cocktail groups. Innovation, technology, and distilling techniques have significantly changed the scene, and in more recent times, these classifications have become more flexible in their interpretation and has seen the birth of new names and categories.

The language is a bit more informal and fun, and ingredients have become less prescriptive, in the social sense. For the hardened mixologist and connoisseurs, precise definitions and recipes are still a thing though!

Here are a some of the more popular cocktail variations which you may be familiar with:

A drink consisting of ginger ale, soda water, and a fresh spiral or twist of citrus fruit rind, served in a Collins or highball glass, with wine, gin, or vodka. An example is a Mango Cooler Cocktail

A spritzer is a tall, chilled drink, always low in alcohol and always made with a sparkle – from prosecco or soda. This is the ideal cocktail for those balmy early evenings. An example is a White Wine Spritzer

A drink taken immediately after downing a sip or a shot – or several of shots – of hard liquor. Chasers are meant to neutralize the taste of straight alcohol so that it doesn’t burn quite as badly going down. An example is a Gloom Chaser Cocktail#1

GOOD VIBES NEED A GOOD BASE, IN THEORY AND IN PRACTICE

Embury writes in his book, The Art of Mixing Drinks, that a cocktail must have a base which he explains as “…a fundamental and distinguishing ingredient of the cocktail and must always comprise more than 50 percent of the entire volume…”.

Many of these bases are craft spirits and they are divided into groups and categories. Eric Grossman’s book, Craft Spirits provides us with clear descriptions and attributes of each. As we are specifically writing about the Tom Collins cocktail, so it’s only fair that we take a closer look at Grossman’s description of gin, which is the preferred base for a Collins.

He defines gin as the most full flavoured of all clear spirits. It is distilled with flavours and it has a distinctive taste that comes from traditional botanicals such as juniper berries, citrus peel, and coriander. Modern day distillers make use of some of the most complex botanicals available and are producing a variety of flavours and tastes. Speaking of bases, the type of glass is another element which not only enhances a cocktail’s smell, taste, and flavour, but it also ads a practical element. Imagine trying to drink a cocktail with a frothy head or pieces of fruit all about ready to spill over the edge of your glass. Serving a cocktail in the right glass is thus a rather delicate affair and ads a touch of class and style.

The correct glass for combining large proportions of non-alcoholic mixers, and which needs to be served cold with lots of ice, is the tall Collins or Highball glass, pictured below.

HOW ABOUT WE MEET TOM COLLINS FOR A DRINK?

Having fully emersed ourselves in the somewhat humoristic history of the Tom Collins cocktail, and the finer practical tips, why don’t we get creative and make one!

This is how you make it:

To make the simple sugar syrup:

Dissolve 300g caster sugar in 150ml water over a low heat. Leave to cool and bottle for future use. It can last for quite a long time. To make the cocktail:

Fill a cocktail shaker with ice. Pour in the gin, lemon juice and simple syrup. Shake for 20 to 30 seconds, until the outside of the shaker is really cold.

Fill a Collins (highball) glass with ice. Strain the contents of the shaker into the glass. Fill the rest of the glass with soda or sparkling water and give it a gentle stir with a spoon.

Garnish with lemon or orange, plus a cocktail cherry (optional).

Now sit back and enjoy a piece of history! We opted to introduce our readers to a simple but rich cocktail as it covers so many important theoretical and practical elements of making a cocktail. It just felt like such a meaningful starting point.

Making a cocktail remains an artistic expression but it also aims to strike a sensitive balance between creativity and a positive culinary experience. How much time we wish to spend on the craft, or whichever pedantic element we wish to focus on in the art of cocktail making, all depends on our personalities and what we enjoy doing.

So please experiment with our range of products and let your imagination run free. Mix and experiment to your heart’s desire, but before your go…rumour has it, that Tom Collins is sitting in a bar right now, badmouthing you at this very moment, but don’t take my word for it, perhaps you need to go there and confront the man yourself… 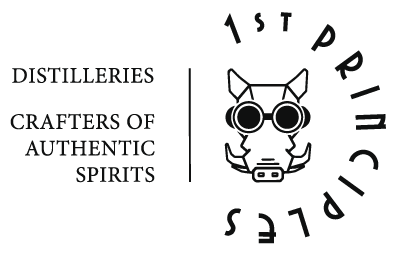 1st Principles Distillery are the creators of some of the world’s finest hand-crafted spirits and are located in the picturesque and fertile Olifant’s River Valley in the town of Vredendal.

Owner and founder Joubert Roux is well-known for producing authentic products with a longstanding heritage, full of personality and founded on 1st Principles.